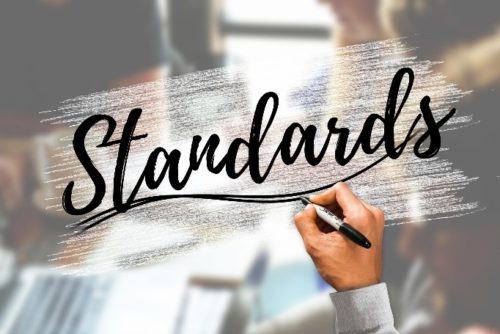 As you know, the world is in a constant state of change – ever faster, more interdisciplinary and more complex. This does not stop at the handling of intellectual property. On the contrary, the IP landscapes are becoming increasingly dense, more intransparent and also more fast-moving. Have you ever wondered how to cope with this change? Well, the following lines are dedicated precisely to this challenge and make a proposal for actively, systematically and holistically confronting it as a company.

This four-part series of articles takes a look at THE challenge of our time, the digital transformation, and its influence on the shift of entire IP landscapes in almost all industries, and how companies can master the situation with the help of the still relatively new DIN 77006.

This is probably the first question asked in IP departments and law firms when being confronted with the existence of this new standard. Sentences such as: “We have a functioning system consisting of employees with many years of experience – why should we have to “control” their work by means of a DIN?” Well, this question can only be answered by clarifying what DIN 77006 is and what it is not, and what problems IP management (IPM) is already facing.

For example, one of the most significant facets of digitalization is the ever-present interlocking of biotech and infotech, which indirectly results in an increase in health and life expectancy, but which at the same time can also give rise to completely new business models, especially in medicine. Would you like a current example? If the before described interlocking had not already been in full swing, the implementation of a “Project Lightspeed” by BioNTech in order to find highly effective mRNA vaccines against SARS-Cov-2 would probably not have been possible to the extent and at the speed demonstrated.

Competition between new and established players

A key effect of the digital transformation in the IP sector is that completely new players are coming together and henceforth vying for the same markets – this is accompanied by displacement. Typical displacement stories are Amazon vs. retail; Uber vs. the cab industry and, for example, Tesla vs. Mercedes, BMW, VW, etc. in the field of e-automobility. That such competitions can also regularly lead to patent disputes is something we have known not only since the recently globally settled disputes of network equipment supplier Nokia vs. carmaker Daimler. The days when Nokia was active in the smartphone sector alone belong to the past.

In this case, the issue was Nokia’s mobile communications patents, whose network technology was allegedly installed in several Mercedes models. In the event of a legal defeat for Daimler, the worst case scenario was a ban on the sale of all the models concerned. If Daimler won, Nokia would have to fear the loss of license fees amounting to hundreds of millions of euros.

This case alone vividly illustrates the IP impact of the digital transformation. Players in their markets must now think far outside the box and expect patent infringement suits arising from digital patents held by third parties who seek to formulate sets of claims on digital platforms and/or business models, which could put entire companies, perhaps even entire industries, out of business. This is because digital transformation takes place in economic eco-systems. This means that new competitors with different value propositions and intentions are constantly emerging. Digital patents are mostly written in a more conceptual and strategic way, with the primary intention of formulating “use cases” in order to be able, at best, to penetrate entire business models. This is one of the reasons for the automotive industry’s “fear” of a 5G standard with currently unforeseeable risks.

Digitalization as a threat to established companies

In other words, “digitalization” has long since ceased to be a buzzword in order to appear up-to-date in a meeting. It has happened, is happening and will continue to happen in all areas of life and the economy. In fact, the current pandemic is even acting as a
“fire accelerator” because it has fueled digitalization projects in public authorities and institutions for just a few months, something experts have not been able to do for more than two decades. Digitalization is now being actively addressed at all levels worldwide – there is no longer any excuse regarding lack of motivation and resources.

So we can state: During the Digital Transformation, new single applicants, start-ups and companies with disruptive innovations and broad business models (use cases) are appearing more and more frequently on the market and significantly expanding the competition to established companies. This can become a threat to traditional companies. However, those who respond by digitally transforming their own businesses and becoming aware of the shifted IP landscape reduce the risk of having their own businesses reduced, displaced or even destroyed by these new entrants.

The change that comes with digital transformation is something that almost all companies must face. The fact is that “yesterday” IP was primarily managed reactively, which would be far from adequate for the scenarios outlined above “today” and even more so “tomorrow”. IP must be managed actively “today” and proactively “tomorrow” at the latest.

From a technical point of view, he holds a PhD in biology with a focus on molecular biology/genetics, cell biology and human biology. However, his work as a patent attorney has expanded his fields of activity many times; for example, to the areas of mechanics and product design as well.

Dr. Plettig completed his publication doctorate on innovative therapies for burn patients at the Charité in Berlin. Before that, Dr. Plettig studied biology at the Freie Universitaet of Berlin. During his academic training, he held several scientific appointments at the University of Pittsburgh, USA.

Since March 2021, Dr. Plettig is responsible for the office management of ETL IP Berlin, a sub-office of ETL IP as a parent company. His areas of expertise lie amongst others in the fields of German, European and International patent, trademark and design law — also including employee invention law. The technical focus of Dr. Plettig is reflected by regenerative medicine; stem cells; diagnostic markers; drug compounds/formulations; mRNA-based compounds; antibodies; vascular intervention; stents; heart valves; and catheter technology.

Next Post Case Study: Signify and the SAILS Methodology Approach. 3<sup>rd</sup> module of the MIPLM 2021/22