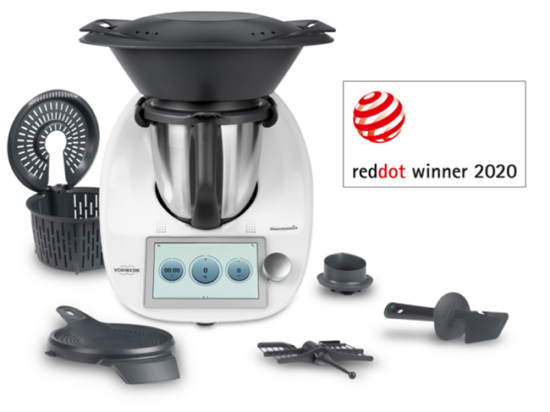 A revolution in Europe’s kitchens took place when the Thermomix TM5 was launched in September 2014 to replace its predecessor, the TM31, which had already been on the market since 2004. The TM5 represents Vorwerk’s digital transformation. Not only is this food processor able to weigh, cut, mix, boil, and steam food, but it can also process digital recipe data stored on recipe chips or downloaded from its recipe platform on the Internet. By means of these data, the TM5 automatically processes recipes and guides the user through the cooking process via its graphic user interface. “Guided cooking” meant that the user only had to follow the instructions and provide the ingredients shown. The Thermomix could go online and perform additional services – for quite many users these internet-based services are the real benefit and the machine on site only helps with the preparation of the dishes.

Vorwerk customers can access a comprehensive and quality-assured recipe database and download the recipes directly to the device and execute them there. Above all, the exchange with other Thermomix users is possible via the platform, for example to exchange new functions, cooking techniques and other experiences. Users can also have dishes suggested via an app and immediately receive a list of ingredients that can be sent directly to their home via locally available delivery services. The company can use the data of Vorwerk customers who have registered on a global cloud-based e-commerce platform to create customer profiles and use them to continuously improve its products and services.

Thermomix promises successful cooking, individualized cooking, and simplicity of operation. In order to achieve these promises, Vorwerk has integrated the recipe software with the hardware of the TM5. The TM5 receives its recipes initially via recipe chips and then via the Internet and guides the user through the cooking process. This “guided cooking” leads to a special cooking experience which leaves the user feeling confident not to make any mistakes when following the individual steps. Simple, quick, and flexible cooking combined with quality-assured recipes is at the core of the Thermomix success guarantee.

Originally there was no significant difference between the Thermomix and competitive food processor in the market. The customer could not distinguish the difference in blades, handling and accessories. The technical properties under IP protection that separated Thermomix from its competitors were not visible to the customers. Blades, motor power, torque, speed, and heating role played a decreasing role amongst predominantly female users. The new meaning of the Thermomix is that of a smart kitchen assistant that helps the customers in their everyday life.

The Case study Vorwerk Thermomix from the Master of Intellectual Property Law and Management (MIPLM) describes how Vorwerk managed to turn its Thermomix into a cult object in Europe’s kitchens.

The tasks for the MIPLM students are:

1 . Describe the original meaning of the company and the products from the customer perspective.

2 . Describe a new meaning for the customer.

3 . Search for three patents which protect the new meaning and describe the role of the patents.

The answers were presented by:

Next Post Interview with Dr. Jürgen Eiselt about the suitability of a digital learning platform for imparting know-how on IP management