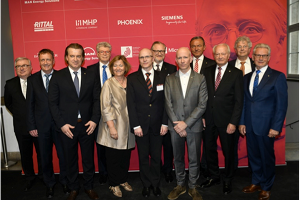 Over 200 invited innovation drivers, entrepreneurs and supporters of innovations attended the ceremony in the Hall of Honor of the Deutsches Museum in Munich. The stage belonged to four winners who embody the basic idea of the diesel medal in a special way. Together with Dr. jur. Heiner Pollert, chairman of the diesel medal’s association, the German Institute for Invention, awarded the spokesman for the Diesel Board of Trustees, Prof. Dr. Alexander J. Wurzer, the diesel medals in the four categories.

The key note was given by the winner of the 2011 Diesel Medal, Mr. Prof. Dr. Friedhelm Loh held under the title “Courage for New Business Models”. Prof. Loh is the owner and chairman of the Friedhelm Loh Group. He is honorary president of the Central Association of the Electrical and Electronics Industry and Vice President of the Federal Association of German Industry.

Phoenix Contact GmbH & Co. KG won in the “Most successful innovation” category. In its almost 100-year history, the company has set the pace in electrical connection technology. The supplier of components for power plant technology increasingly developed into a supplier of control and automation technology. The components and solutions can also be found in mechanical engineering and process technology. With its systems, Phoenix Contact has advanced the development stages of production up to Industry 4.0 and is one of the pioneers in electric mobility. The family company is a product developer for everything to do with electrical engineering and automation and has always embraced technological and associated social changes. Phoenix Contact was just able to prevail against the also nominated company Giesecke + Devrient GmbH, which is active worldwide in the physical and digital world for security technologies, and one of the leading providers of efficient and resource-saving compressed air systems Kaeser Kompressoren SE.

The diesel medal for the “most sustainable innovation” was awarded to the family company WITTENSTEIN SE for its Galaxie® drive system. The Galaxie® is a new type of gearbox and thus a basic technology with which the most important branches of Germany – mechanical engineering and automotive technology – can make the next leap in development in terms of productivity, precision, energy and material use. The group of companies – on the way from a drive manufacturer and mechatronics group to a “Leader in Cybertronics” – is one of the pioneers of a digital transformation that is manageable for companies and employees. In addition to WITTENSTEIN, arago GmbH, a leading company in the field of artificial intelligence, and the MENNEKES GROUP, which is one of the leading innovators in the field of industrial connectors and electromobility, were nominated.

Even before the most successful TV format about innovative products and business start-ups at prime time “Die Höhle der Löwen” and the discovery magazine “ZDF Pur +”, the knowledge magazine “GEOlino” received the diesel medal in the category “Best Media Communication”. The print magazine for children and young people between the ages of nine and thirteen is part of the GEO group of the publishing house Gruner + Jahr. For over 20 years, the GEOlino magazine has succeeded in breaking down complex topics in a way that suits the target group and making them understandable and attractive so that they are fun to read and arouse the curiosity of young readers. The Diesel Board of Trustees particularly emphasized that the team around Martin Verg successfully keeps the print medium in a highly competitive media market that is continuously changing as a result of digitization.

The AZO Anwendungszentrum GmbH Oberpfaffenhofen was awarded the “Best Innovation Promotion” award. Originating from the German Aerospace Center (DLR), the company has supported more than 155 Bavarian start-ups in the fields of space and satellite technology since it was founded in 2004. At the same time, AZO operates the largest space innovation network in Europe. The focus is on the commercial use of satellite infrastructures such as satellite navigation and communication as well as earth observation and space technologies by startups, SMEs and large companies. Other nominees in the category were the exchange and operating platform for big data applications Smart Data Innovation Lab and the Plug & Play Germany GmbH, the unique international innovation accelerator that promotes cooperation between startups and established companies.

About the Diesel Medal

The Diesel Medal was launched on the initiative of Eugen Diesel, Rudolf Diesel’s son, in 1953 and is Germany’s oldest innovation award. It is awarded by the German Institute for Invention (DIE e.V.). One of the goals of DIE e.V. is to adequately honor the achievements of inventors and entrepreneurs in public and to consistently support their work. The award sends out signals to the entire economy and puts the subject of innovation in the focus of the public. The long list of prominent medal holders underlines the great importance of intellectual creation and entrepreneurial success. Famous prize winners include Wernher von Braun, Gottlob Bauknecht, Arthur Fischer, Anton Kathrein, Sybill Storz, Viktor Dulger, Karl Schlecht, Friedhelm Loh, Christof Bosch, the Nobel Prize winners Herrmann Staudinger, Ernst Ruska and Manfred Eigen, as well as the SAP founder Dietmar Hopp, Hasso Plattner and Klaus E. Tschira. The board of the DIE e.V. includes: Dr. Heiner Pollert (First Chairman), Prof. Dr. Alexander Wurzer (spokesman for the Diesel Board of Trustees) and Manfred Spaltensberger.