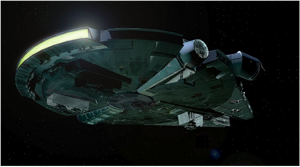 In a case decided under the ACR (Accelerated Case Resolution) regime at the TTAB (Trademark Trial and Appeal Board) Lucasfilm’s opposition against “Millennial Falcon” was sustained for live entertainment and production services. The Board said that Millennial Falcon can be likely confused with the well-established mark “Millennium Falcon” registered for Lucasfilm Entertainment Company. Millennium Falcon is registered for Toy vehicles and used for entertainment services, sound recordings, live musical concerts, films, television programs, computer and video games, comic books, amusement parks, games, and clothing.

Obviously, the argument that Millennial Falcon is a parody and a satirical comment on the pop culture of Star Wars did not worked out. Star Wars is nowadays a part of the Disney empire and even the digital natives amongst the millennials have to accept, that the empire will strike back. Most people know the Millennium Falcon from the Star Wars movies and Lucasfilm made billions of dollars since 1977 when the first movie was released. The Board noted that Lucasfilm uses the Millennium Falcon mark “as a merchandising mark, part and parcel of the STAR WARS mythos in promoting films and music and has been the subject of licenses for numerous collateral products.”

The IP linked to the Star Wars brand and their exploitation is probably the most successful franchise of all time. The entire Star Wars franchise is generating about $30 billion in revenue over the past around 40 years. Disney clearly knew it was on to a good thing when it acquired Lucasfilm (which included the entire Star Wars franchise), the company behind the Star Wars films, from founder George Lucas himself in 2012 for $4.05bn (£2.5bn) – a bargain it turns out when you consider the mind boggling revenue figures already associated with this story.

It is one of the exclusive content-based driving forces for the subscription video-on-demand over-the-top streaming service owned and operated by the media and entertainment distribution division of The Walt Disney Company.

So, be careful when you enter the IP-realm of Star Wars. Here some examples of marks registered by Lucasfilm:

Next Post Connected Car and IoT in danger: Daimler receives the next injunction