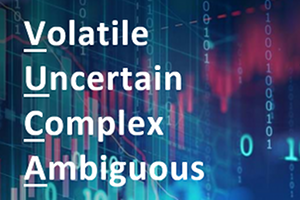 Across many industries, a rising tide of VUCA-characteristic, like volatility, uncertainty and business complexity is shaking markets and changing the nature and rules of competition. VUCA is an acronym with made its way into the business lexicon. The different components have been variously used to describe an environment, which defies confident diagnosis and befuddles executives. But is it true, that VUCA conditions render useless any effort to understand the future and to plan responses, in short to implement strategies and to value assets? From an economist standpoint this means managing uncertainty. This leads to strategic anticipation (e.g. flexible planning), navigational leadership, agility, resilience, collaboration, and learning. And, to focus on the implications of uncertainty relative to strategy, the need to consider increasing speed, interconnectivity, cyber-attacks to name just a few considerations defining a wide-ranging view of the future. During the lecture four levels of uncertainty where discussed: clear single view of the future, alternative-limited set of outcomes, range and ambiguity. And tools which can be applied like decision theory and game theory.

On November 1989, the Berlin Wall began coming down. It had symbolized the Cold war and the birth of game theory. Though conventional wars between “client states” killed thousands worldwide, guided by the game theory-based concept of mutually assured destruction, the two alliances, North Atlantic Treaty Organization and Warsaw Pact, avoided global annihilation. After 1989 the world became multipolar and much more VUCA. A stream of individually small but collectively difficult problems began causing at least as much fear as had the prior well understood existential cold war crisis. These problems range from climate change, increased waste production, a rising demand on resources, like rare earths for digital devises, and terrorism afflicted countries globally triggering never-ending wars. In 1978, the US Army War College, anticipating these geo-socio-political changes, coined the acronym VUCA to capture their essence. Businesses co-opted the acronym around 2003 as the economic implications became obvious. Today, VUCA has become just another buzzword like “disruption” it gets tossed around so much that it has lost its meaning, nearly. It gets added to strategy presentations but demands no change in mindset, behaviors, or action. But obviously, today we live I a digitally driven VUCA world.

The theory of social situations or more from an economic standpoint coming game theory is an accurate description of strategic interactions. Decision theory is the theory of one person games, which are games of a single player against the environment. The focus is on preferences and the formation of beliefs. The most widely used form of decision theory argues that preferences among risky alternatives can be described by the maximization of the expected value of a numerical utility function, where utility may depend on a number of things, but in situations of interest to economists often depends on money income.

Decision theory is a framework of logical and mathematical concepts, helping managers in formulating rules to reach the most advantageous course of action, based on a strategy (MIPLM 1st Module) under given circumstances. This theoretical and interdisciplinary approach helps to determine how decisions are made given unknown variables and an uncertain environment. This is what IP managers need to now for a “VUCA world” where we have to face various dimensions of an “uncontrollable” environment. VUCA is an acronym and stands for Volatile, Uncertain, Complex and Ambiguous. These environmental conditions in many businesses have concrete consequences for management, especially for decision making in IP management. Decision theory brings together psychology, statistics, philosophy and mathematics to analyze the decision-making process. Also discussed in this module is game theory, which explains social situations for example between competitors. Game theory is a framework for social situations among competing players. It is the science of strategy and optimal decision making of independent and competing actors in a strategic setting.

The second part of this module is dedicated to understanding decision making and valuation. Companies create value through their operations. Managers consider operational excellence as a key ability to maximize firm value. But within the digital transformation, globalization, innovation and the ongoing war for talents the firm’s performance depends critically on a company’s ability to accurately determine its value and to assess the market impact of its IP. IP managers need valuation expertise to understand structured and systematic value creation with IP.

In our complex world, companies need to develop an increasing understanding on how they create value for stakeholders and society at large, to be able to develop a long-term, viable strategy and to keep their license to operate. Value creation, however, is only partially captured by a company’s financial statements, since the latter mainly reflect its financial and manufactured capital. Other forms of capital, such as social, human, intellectual and natural capital, are only partially or not visible at all in a company’s financial accounts. Since these forms of capital often remain invisible, the question arises whether companies, and their stakeholders, have the right information base to make decisions and mitigate risks that could affect their overall value creation. Three quarters of the purchase price in M&A deals is represented by goodwill and intangible assets according to the 2017 Purchase Price Allocation Study from PPAnalyser. The report highlights the importance of identifying and measuring the value of intangible assets to support the rationale of an acquisition.

Intangibles – e.g. trade names, trademarks, brand names, patents, licenses, know-how, the author’s intellectual rights – can appear in all dimensions of business activity: distribution, financial services, sales and management. Usually, intangibles generate added value that exceeds the costs attributed to them and they cannot be replaced in a short time. Generally, the intangibles contribute to the growth of sales or the reduction of costs, and consequently they raise and enhance the value of the business.

A general profile of the three universally accepted approaches to the appraisal of intangibles:

The market approach (comparative) – the value of intangibles is estimated based on comparable market transactions. As the intangibles are rather seldom sold separately from the enterprise itself and it is hard to find comparable assets being traded on an active market, use of this method is possible in practice only in limited cases.

The cost approach – the value of intangibles is estimated as the cost necessary to produce the asset or replace it.

Next Post IP Strategies in the Digital Transformation: Who owns the Smart City?