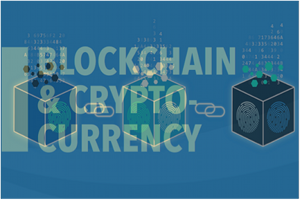 The blockchain is an undeniably ingenious invention. Born by a person or group of people known by the pseudonym, Satoshi Nakamoto. Obviously blockchain is one of the most anticipated and potentially revolutionary technologies since the invention of the internet. This technology introduces a new era of how we do business and handle information. Ocean Tomo, an intellectual property merchant bank that provides financial products and services for IP based business, published in June 2018 an industry report on blockchain & crypto-currency and now two papers in les Nouvelles of Licensing Executives Society International.

The blockchain is a distributed, shared, encrypted database that serves as an irreversible and incorruptible public repository of information. Put simply, it is a way to structure and store data. The benefit of blockchain databases over traditional methods of storing data is the ability to track information over time, whereas a typical database is just a snapshot of the information at a particular moment. With this expanded information set, a blockchain database can track the history of itself at any given point in time, a feature that opens information storage to a breadth of new use-cases and opportunities. In the following movie, the blockchain technology is explained.

Unfortunately, the predictive power of patents in markets is often overlooked and/or underappreciated. Since the 190s, intangible assets, like patents and other intellectual property, have grown from about 17 percent of the S&P 500 market value, to over 80 percent by 2015. What is well documented in another study from Ocean Tomo about intangible asset market value.

The patent propensity on blockchain technologies is continuously rising. According to the data, which is available, we can expect to see an even stronger growth rate in this field. The early adopters of blockchain patents, and they comprise some of the major players in the tech and finance industries, are shown in the next figures.

We can expect to see these companies and their competitors in each of these industries continue their development of blockchain IP in the near to mid-term as the technology becomes more commonplace.

It’s logical that the finance and tech industries are well represented, as blockchain’s first and most established use-case was centered around a new technology to support financial transactions. It is also notable that financial applications have been, and are expected to be, the first widely adopted use of blockchain. Already, nearly every major U.S. bank has begun their own blockchain initiatives, along with numerous startups looking to enter the fintech space using blockchain. The next figure below shows just how dominant financial applications have been up to this point in the patent application process.

In addition to this analysis of the patent landscape, Ocean Tomo reports about different applications of blockchain technologies within the IP business:

IPwe is a blockchain-enabled patent registry and ratings database currently containing basic information on 80 percent of world’s patents. The IPwe system exists to enhance the patent ecosystem, giving patent owner’s exposure to potential buyers and licensees and companies seeking new technology an easier way to find the technology they need to grow.

KodakOne is a revolutionary new image rights management and protection platform secured in the blockchain. The KODAKOne image rights management platform will create an encrypted, digital ledger of rights ownership for photographers to register both new and archive work that they can then license within the platform. KODAKCoin allows participating photographers to take part in a new economy for photography, receive payment for licensing their work immediately upon sale, and sell their work confidently on a secure blockchain platform.

Intellectual Property Coin Group, Inc. (IPCG) is a patent pending Ethereum based blockchain platform and related cryptocurrencies designed to facilitate intellectual property-based transactions (primarily focused on patents). IPCG’s mission is to “promote low cost and efficient use of technology for public good.” The company will issue and lend IP coins to patent owners secured by the borrowers underlying patents.

Next Post German Innovation Award 2019 for Schneider Modulo, the Industry 4.0 revolution in the production of free-form lenses