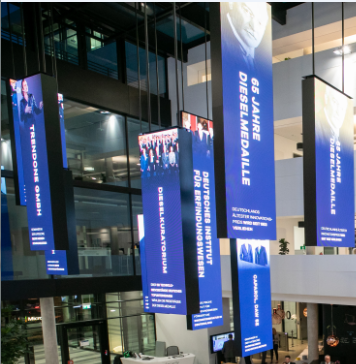 Microsoft presented the office of the future at the Rudolf Diesel reception on April 13, 2018, on the occasion of the awarding of the diesel medals. A year ago Microsoft opened its German headquarters in Munich-Schwabing as one of the most modern offices in Germany. Munich is known as the IT capital of Germany. So far, more than 50,000 guests have come to the IT group to find out about the future at Microsoft. With the “Smart Workspace”, Microsoft has developed the concept for Work 4.0 in close cooperation with the Fraunhofer IAO (Institute for Work Management and Organization) and has implemented its own vision of the office of the future. On seven floors and over 26,000 square meters, with eleven roof terraces and technological equipment at the highest level as well as high sustainability standards, Microsoft Germany offers an insight into the work of the future under optimal conditions.

With the “Smart Workspace”, Microsoft and Fraunhofer IAO have developed a space and equipment concept that eliminates the rigid, uniform workspace and relies on new, open office structures that are geared to different work requirements and can be used flexibly. The focus is always on the employees with their individual needs, talents and demands on the workplace and type of activity. Each team and employee can decide for themselves how and in what composition they want to work together where. With the “Smart Workspace” as a flexible work environment, Microsoft stimulates work in the flow and creates optimal conditions for a productive high with different performance requirements.

In addition to the possibilities to view and demonstrate Microsoft’s rooms and specific technologies, other technologies were shown and discussed as part of the technology forum at the Rudolf Diesel reception. Betrandt AG presented a test vehicle for the most modern assistance systems. “Autonomous driving” is more than just a trend in the automotive industry. For Klaus Härtl, Head of Electronics Development at Bertrandt AG, one thing is certain: “Partnerships that bundle various competencies are essential in order to meet the associated challenges. With the cooperation between Bertrandt and Fraunhofer IIS (Institute for Integrated Circuits), both partners use synergies. Fraunhofer IIS contributes valuable know-how on localization techniques, Bertrandt its experience on autonomous driving and vehicle-related topics: vehicle know-how and a holistic understanding of the vehicle and system, in order to transfer the function shown in the context of the control unit architecture into the vehicle integrate. ”“ In the course of the innovation project on networked assistance systems, one of the showcases was the ‘stop at the stop line’ ”, Klaus Härtl continues.

Dr. Wolfgang Felber, Head of the Localization Business Unit at Fraunhofer IIS, explains the technical approach: “The advantage is that we use technologies that are already available in every modern vehicle. This means that no additional hardware is required to get the solution on the road. The intelligent combination of existing technology for more precise localization alone makes this possible.”

Customers and partners used the event to take a seat in the test vehicle and convince themselves of the performance of the prototype solution. By integrating the system into existing assistance functions, the driver is not distracted by an additional display. In the cockpit you can see the distance from the stop line where you want to stop. Depending on the speed, the automatic braking process is initiated about 100 meters beforehand. Other assistance systems are not influenced by the additional function. The implemented solution allows the vehicle to stop at the stop line with an accuracy of approx. 50 centimeters – solely through the use of novel correction data. If necessary, this accuracy can also be increased through the use of improved technology. Standard GPS receivers, as used up to now, only allow positioning in the meter range.

In order for the car to come to a stop exactly at the stop line, infrastructure data are necessary, such as the position of stop lines, traffic lights, etc. In addition, reliable and precise localization is required. Dr. Wolfgang Felber: “The performance of a standard GPS receiver does not meet these requirements. Correction data, as it has been used up to now, increases its accuracy, but is only transmitted on demand via mobile radio and requires valuable bandwidth. Newer correction data can be used in a region and can be used by all vehicles in this region. The process developed by Bertrandt and us relies on the digital radio standard DAB as a broadcast medium. In the future, however, other transmission paths are also conceivable, e.g. B. via the new 5G cellular standard or via satellite. We would like to show what is already possible with the latest technology. ”If the GPS reception or the correction data fail, the vehicle’s inertial sensors and odometry, the position estimate of the vehicle based on the wheel revolutions, can be used.

The focus of the presented assistance system is the support of the driver with regard to comfort and safety. In addition, resources are saved, e.g. B. Fuel and wearing parts in the car by optimizing cornering speeds during automated driving. This precise location information also optimizes the quality of swarm data, which is of considerable importance for future networked driving. One scenario is, for example, the detection of road damage, for which every vehicle collects data and sends it to a cloud. Subsequent vehicles automatically adjust the damper control and repair work can take place more specifically.

Osram presented the HL prototype “Augmented Lighting Design” as a product vision as part of the technology forum during the Rudolf Diesel reception. A use case was used to demonstrate how digital technologies can optimize the lighting design process. The solutions help the lighting designer to give a deep insight into his lighting concept and enable him to make this concept tangible for the customer in a new way. This gives lighting planners and customers efficient and interactive access to future lighting scenarios. Architects, electrical planners and installers are given a detailed understanding of the integration of the lighting concept into the space, and established lighting calculation programs can be used through a simple, intuitive interface.

There were also showcases and guided tours. Among other things on the subject of cybersecurity. During a lecture with a quiz, the participants were able to test their own knowledge of the matter and were given an overview of this increasingly important topic. Microsoft’s contributions were discussed on artificial intelligence and an intensive dialogue was held on questions of responsibility and ethical principles. The Microsoft Technology Center was presented on the top floor and various future technologies could be tried out live.

A few showcases showed in concrete terms how, for example, one can deal with AI technologies and what performance can already be achieved today. For example with the files on the assassination attempt on John F. Kennedy. In October 2017, Donald Trump had to publish the majority of the investigation documents due to a law. AI-based machines are insanely fast and good at sifting through data for certain patterns. Microsoft has built a website that uses Azure AI technologies to turn the disordered mass of initially around 6,000 released (declassified) documents with 34,000 pages into a collection of organized information that is easier to research. The visitors were able to visit the project, which is still in an early stage of development. As part of the reception, the participants could become detective themselves and search for connections in the data live.

Another show case was the COBI Brezn Bike, which made the future of networked cycling a live experience. Microsoft ISV partner COBI (Connected Biking) showed how the user experience of cycling changes through the networking of the smartphone with the bike. The system, which has won various innovation prizes, offers various support systems for more safety, convenience and fun on the bike path. The architecture shown can be expanded to include several bicycles and integrated into systemic mobility systems. COBI was recently acquired by Bosch eBike-Systems. COBI has developed into a future cloud & IoT solution provider for bicycle & mobility approaches at Bosch.

Finally, NVIDIA showed a sample application of artificial intelligence in art. An AI-based algorithm transformed a photo of the participants into a work of art, in the typical style of well-known painters of choice. The computing power for this little wonder came from the MS cloud service Azure.

Next Post Spring forum at Fraunhofer headquarters on the role of the CTO in digital transformation, Rittal reports on Industry 4.0 strategy