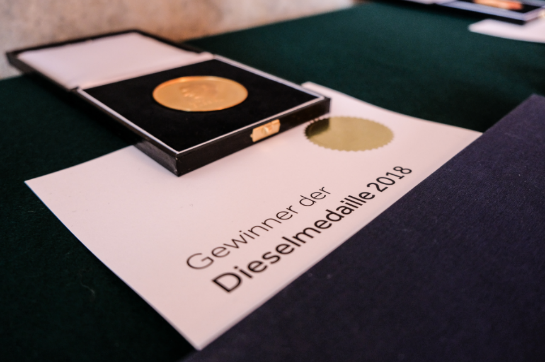 Munich, April 13, 2018 – The winners of the 2018 diesel medals have been announced. The companies HUMBOLDT-INNOVATION GmbH, TRENDONE GmbH, DAW SE (CAPAROL) and RATIONAL AG have been awarded Germany’s oldest innovation prize.

With over 200 invited guests from business, politics and the media, prominent personalities, companies and organizations from the German innovation scene were honored on Friday, April 13th at the Deutsches Museum in Munich. From a total of 12 nominations, the Diesel Board of Trustees selected four winners who embody the basic idea of the Diesel Medal in a special way. The Diesel Medal, Germany’s oldest innovation award, has been awarded for economically successful, entrepreneurial innovation since 1953. The Diesel Board of Trustees represents the industrial management elite with technical competence in Germany when choosing the diesel medalists. There are around fifty technology directors from world market leaders, medium-sized technology companies, who together employ half a million people and generate sales of over 125 billion euros.

Together with Dr. jur. Heiner Pollert, chairman of the Diesel Medal’s Association, the German Institute for Invention, the spokesman for the Diesel Board of Trustees, Prof. Dr. Alexander J. Wurzer, the diesel medals in four categories.

In the “Best Innovation Promotion” category, the diesel medal was awarded to HUMBOLDT-INNOVATION GmbH. The HUMBOLDT-INNOVATION GmbH is the interface of the Humboldt University in Berlin. “We want to meet the growing demand for a functioning knowledge and technology transfer between science and industry,” explains Managing Director Volker Hofmann. The young company succeeded in doing this. Founded in 2005 as a 100 percent subsidiary of Humboldt University, it now enjoys an excellent reputation as a pioneer and facilitator in the implementation of innovative business ideas. Over 60 new companies, startups and spin-offs by current and former students with a total of around 660 new jobs have been created so far.

In the jury vote, HUMBOLDT-INNOVATION GmbH was able to prevail against “octimine technologies GmbH” and “Productive4.0, Infineon Technologies AG”.

The Diesel Medal for the best media communication went to TRENDONE GmbH, which researches micro-trends and innovations in 22 language regions around the world and was able to secure the award in a close decision ahead of the media group “Hubert Burda Media” and the magazine “StartingUp”. With a network of 80 trend scouts and trend experts, the company scans relevant sources on a daily basis in order to track down innovations, trends and best practice cases from different industries. Intelligent marketing campaigns, media and online innovations as well as new business models, technologies and products are discovered by TRENDONE even before they can be established in the market.

Even before the technology leader in the field of wire mesh and industrial machines from “Haver & Boecker oHG” and the innovative systems for large-scale architectural glass coating and thin-film photovoltaics from “VON ARDENNE GmbH”, the panel of experts won the award in the “Most sustainable innovation” category for CAPAROL Farben Lacke Bautenschutz GmbH (DAW SE) decided. In 1895 Robert Murjahn founded the “Deutsche Amphibolin-Werke”, now DAW, in Ober-Ramstadt in Hessen. The Caparol brand that emerged from this is known to this day as a leading manufacturer of paints for the construction sector. Murjahn’s pioneering inventions promoted the company’s rise. In product development, Caparol uses its innovative strength primarily for resource-saving and environmentally friendly solutions. For example, Caparol was the first provider in the world to offer harmless, emission-minimized and solvent-free interior paints.

In the “Most Successful Innovation” category, the Diesel Board of Trustees chose RATIONAL AG, the global market and technology leader in the field of large and industrial kitchen appliances. The other nominees in this category were Knorr-Bremse AG, the world’s leading manufacturer of brake systems and provider of further subsystems for rail and commercial vehicles, and Bizerba SE and Co. KG, a global technology company for professional system solutions in the field of weighing and information , Communication and food service technology. Over 40 years ago, Siegfried Meister, founder of RATIONAL AG, began producing new types of hot air devices for large and industrial kitchen devices for thermal food preparation in Landsberg am Lech.

When he and his then still small team added steam to the dry hot air in the oven in 1976, the combi-steamer was born – an invention that has since dramatically changed production processes, organization and efficiency in large and commercial kitchens around the world. RATIONAL AG has risen to become the global market and technology leader, but the pioneering spirit has remained. The company does not see itself as a pure mechanical engineering company, but as an innovative solution provider whose main focus is on the satisfaction of its customers.

About the diesel medal

The Diesel Medal was launched on the initiative of Eugen Diesel, Rudolf Diesel’s son in 1953, making it Germany’s oldest innovation award. It is awarded by the German Institute for Invention (DIE e.V.). One of the goals of DIE e.V. is to adequately honor the achievements of inventors and entrepreneurs in public and to consistently support their work. The award sends a signal to the entire economy and puts the subject of innovation in the focus of the public. The long list of prominent medal holders underlines the great importance of intellectual creation and entrepreneurial success. Famous prize winners include Wernher von Braun, Gottlob Bauknecht, Arthur Fischer, Anton Kathrein, Sybill Storz, Viktor Dulger, Karl Schlecht, Friedhelm Loh, Christof Bosch, the Nobel Prize winners Herrmann Staudinger, Ernst Ruska and Manfred Eigen, and the SAP founders Dietmar Hopp, Hasso Plattner and Klaus E. Tschira. The board of the DIE e.V. includes: Dr. Heiner Pollert (First Chairman), Prof. Dr. Alexander J. Wurzer (spokesman for the Diesel Board of Trustees) and Manfred Spaltenberger.