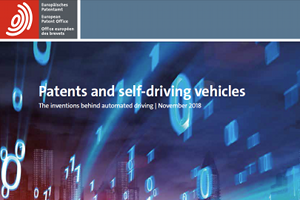 Billions of Euros and Dollars are spent around the globe to make future happen: autonomous driving or so-called robot cars. There is no doubt that the future of driving are driverless cars with a combination of sensors, actuators, and software to control, navigate, and drive the vehicle. The technology is still in its infancy, but it is fast improving and becoming increasingly powerful. It has the potential to radically transform transportation around the globe. The question is: who will win this technology race? Are self-driving cars the natural home turf of automakers or will technology-driven newcomers make the game? A new analysis from the European Patent Office explains the patent situation in the field.

The EPO study also shows that half of the top 25 companies operating in this field, including the top four applicants, are not traditional automotive/transport companies, but ICT firms. “This study provides a comprehensive picture of the trends in automated driving technologies as reflected in patents,” says EPO President António Campinos. “Automotive and digital technologies are both traditionally very innovative sectors and the report shows that there is a crossroads where the two sectors meet, which is marked by significant changes in its patent landscape. As patents are filed ahead of the appearance of products in the marketplace, information from patents can offer unique insights into the direction a technology is heading in, and which companies and countries are in the lead.” He adds: “The study shows that Europe is well-positioned in the key technologies related to self-driving vehicles.”

Self-driving cars: EPO study shows sharp rise in patent applications and half of them are not from the automotive industry Score: 0 / 5 (0votes)
Share on Facebook Pin on Pinterest Tweet on Twitter Share on Google Plus Send via WhatsApp Send via E-Mail
AutomotiveAutonomous Driving
Read more
Previous Post Broadcom’s patent infringement suits based on 18 patents against VW: One billion € claim and threat of production stop