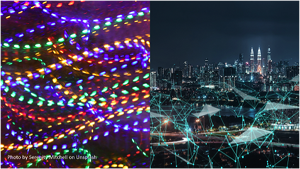 The role of IP and with it IP strategies have shifted dramatically during the last decades. Today, IP is in many cases not used anymore to keep potential competitors out of the own market. In the contrary, IP is licensed out to other companies to help them developing and selling their own products within the common eco-system. This way the total size of the market is growing and the licensing company is playing a long term eco-system IP strategy, where the licensing revenue increases with the size of the eco-system in the long term. This makes use of the logics of network economics, where the value of a network grows with the square of the number of users, which is known as Metcalfe’s law.

The development of the role of IP in an industry, from protecting basic technologies to huge licensing programs, can be exemplarily seen in the lighting industry with the development of the LED. The story of the LED starts in 1960, when Nick Holonyak developed the red LED at General Electric. But the red LED was not of much use as a lighting application, yet. Only in 1993 the LED became interesting as a replacement of traditional light bulbs, when Shuji Nakamura invented the blue LED at Nichia. For this achievement he gained with two other scientists the Nobel prize in physics in 2014. Blue LEDs, in contrast to red LEDs, could be coated with phosphor to emit white light and therefore they could be used in lighting applications as replacements of classical lightbulbs. Later the combination of blue, red, and green LEDs in a single lighting solution could create basically any light color possible.

During this time of technological development also the role of IP changed dramatically. In the early period from the 90s to around 2010 the main LED manufacturers tried to get the dominant position in the market by protecting their technology with IP, be it technologies based on phosphor coated blue LEDs or red, green, and blue (RGB) LEDs to produce natural looking white light. This situation escalated in 2011 in a patent war between the big LED manufacturers, e.g. Osram filed a complaint against LG in the USA claiming that their flat-screen TVs contain LEDs, which infringe Osram’s patents. The intensity of the patent wars decreased a lot during the 2010s, when the big five producers of LED lights, Nichia, Osram, Cree, Toyota Gosei and Philips Lumileds created a common cross-licensing program.

The latest development in LED licensing are licensing programs such as EnabLED by Signify, former Philips lighting, which started already in 2008. Here, over 490 Signify inventions covered by around 3650 patents are offered to the participants of the licensing program, so that they can develop new and innovative products at higher speed. This helps the licensee to reduce their time to market and helps the licensor by increasing the overall market size of the eco-system, which they dominate. So, Signify is playing the role of an eco-system orchestrator, who supports the growth of the other smaller eco-system companies to increase its own revenue in the long term, and supports these activities with a clear IP strategy.

For more information, please have a look at our LinkedIn channel, where we regularly publish new case studies and have a LinkedIn live talk every Wednesday: