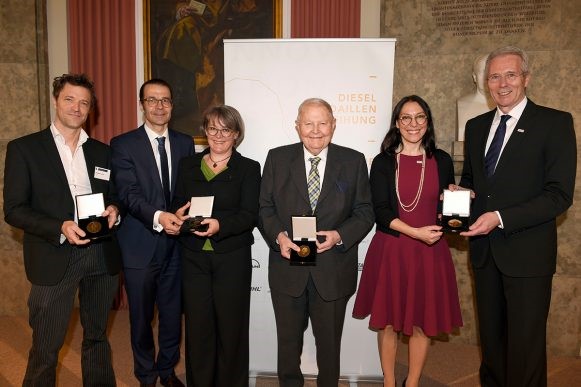 Claas, Viessmann, Wissensfabrik and the television format Quarks & Co were awarded Germany’s oldest innovation prize on April 7th in Munich. The prizes were accepted by Helmut Claas and Dr. Nathalie von Siemens for the knowledge factory, whose laudation by Prof. Dr. Henning Kagermann, President of the German Academy of Science and Engineering – acatech. Dr. Doris Schmack and Mr. Ulrich Schmack for MicrobEnergy from Viessmann. Mr. Wolfgang Lemme from Westdeutscher Rundfunk received the award for the best media communication about innovation for Quarks & Co with Ranga Yogeshwar, the laudation from Mrs. Pamela Wershofen, who as editor of the WDR mediagroup 2013 received the Diesel medal for “Knowledge before eight”.

With over 200 invited guests from business, politics and the media, prominent personalities, companies and organizations from the German innovation scene were honored on Friday, April 7th at the Deutsches Museum in Munich.

From a total of 12 nominations, the Diesel Board of Trustees, a jury consisting of around fifty technical directors from top German companies, selected four winners who embody the basic idea of the diesel medal in a special way. Together with Dr. jur. Heiner Pollert, chairman of the Diesel Medal’s Association, the German Institute for Invention, the spokesperson for the Diesel Board of Trustees, Prof. Dr. Alexander Wurzer, the diesel medals in four categories.

In the “Best Innovation Promotion” category, the diesel medal was awarded to the “Wissensfabrik” initiative. The Wissensfabrik is a network of the German economy in which around 130 companies and foundations campaign for education and entrepreneurship. In the jury vote, the Wissensfabrik prevailed against the “Deutsche Bundesstiftung Umwelt” and the “German Accelerator”.

The diesel medal for the best media communication went to the science television magazine “Quarks & Co”, which has been broadcast by WDR since 1993, and which won the award in a tight decision ahead of the business magazine “brand eins” and the media facade manufacturer “ONLYGLASS”.

Even before the sustainable building concept “AH Aktiv Haus” and the innovative fire protection solutions from Stöbich Brandschutz GmbH, the panel of experts decided in favor of the Viessmann Group’s subsidiary MicrobEnergy GmbH for the award in the “Most sustainable innovation” category. MicrobEnergy operates the power-to-gas process, in which excess energy can be temporarily stored in the natural gas network through methanation.

The Diesel Medal, Germany’s oldest innovation prize, has been awarded for economically successful, entrepreneurial innovation achievements since 1953. The German Institute for Invention has adapted the award regulations to the conditions of modern, dynamic technology and innovation. “It was our goal to fill the committee for awarding the diesel medal – the Diesel Board of Trustees – with proven industry and technology experts from the industry,” said Prof. Dr. Alexander Wurzer, spokesman for the Diesel Board of Trustees. When selecting the diesel medalists, the Diesel Board of Trustees represents the industrial management elite with technical competence in Germany. There are around fifty technology directors from world market leaders, medium-sized technology companies, who together employ half a million people and generate sales of over 100 billion euros.

About the diesel medal

The Diesel Medal was launched on the initiative of Eugen Diesel, Rudolf Diesel’s son in 1953, making it Germany’s oldest innovation award. It is awarded by the German Institute for Invention (DIE e.V.). One of the goals of DIE e.V. is to adequately honor the achievements of inventors and entrepreneurs in public and to consistently support their work. The award sends out a signal to the entire economy and puts the subject of innovation in the focus of the public. The long list of prominent medal holders underlines the great importance of intellectual creation and entrepreneurial success. Famous prize winners include Wernher von Braun, Gottlob Bauknecht, Arthur Fischer, Anton Kathrein, Sybill Storz, Viktor Dulger, Karl Schlecht, Friedhelm Loh, Christof Bosch, the Nobel Prize winners Herrmann Staudinger, Ernst Ruska and Manfred Eigen, as well as the SAP founder Dietmar Hopp, Hasso Plattner and Klaus E. Tschira. The board of the DIE e.V. includes: Dr. Heiner Pollert (First Chairman), Prof. Dr. Alexander Wurzer (Speaker of the Diesel Board of Trustees) and Manfred Spaltenberger.

Next Post CEIPI Summer School on Intellectual Property in Europe 2017