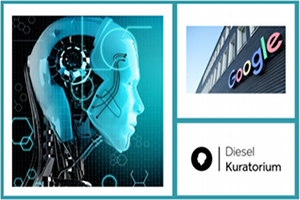 At the invitation of Dr. Wieland Holfelder, Head of the Google Development Center in Munich and member of the Diesel Board of Trustees, will be sharing experiences on October 22nd in the Munich Google Dependance, with a presentation and discussion of the applied AI initiative. Under the slogan “Lift Germany to the AI age” and organized in the UnternehmerTUM eco-system, applied AI supports German medium-sized companies in particular in the application and implementation of AI-based technologies.

Google is the initiative’s technology partner with IBM, Intel, Dell and CISCO, among others. The industrial partners include Giesecke + Devrient, HAWE, Festo, Linde, Infineon, Siemens, BMW, Deutsche Telekom and ZF Friedrichshafen. The purpose of the meeting is to exchange information about the status of the initiative..

Entrepreneur TUM is one of the largest non-profit innovation centers in Europe. As a neutral platform with over 200 employees, over 2500 people willing to found a company, over 100 startups and over 100 companies are supported every year. Applied AI is used to process and solve the greatest challenges in the application of modern AI technologies in real use cases. Applied AI is convinced that a real competitive advantage can only be achieved if the industry actively helps create experience with AI and thereby improves products and services. The essential elements of a comprehensive AI strategy are summarized in the white paper “Applying AI”.

For “invest in bavaria” by the Bavarian State Ministry for Economic Affairs, Regional Development and Energy, Dr. Holfelder gave an interview on why Google settled in Munich of all places. Google offers AI solutions to create personalized customer experiences. Ready-made solutions are available for this. Google solutions are developed and used, for example, for METRO, Deloitte or KPMG.

As part of the research project of Dr. Martin Wilming, European patent attorney on patent strategies for the protection of AI-based technologies at the graduate college of the Diesel Board of Trustees, the current case of the submission “G 3/08 – Patentability of computer programs” is discussed and analyzed before the Enlarged Board of Appeal of the European Patent Office. With the current submission T 0489/14, the Technical Board of Appeal is asking the following questions:

Dr. Wilming submitted an Amicus Curiae letter, ie a “third party statement” to the Enlarged Board of Appeal on September 1, 2019 (Statement acc. To Art. 10 RoP EBoA regarding G 1/19), which can be read here , which specifically targets the AI aspects of the question at hand.

In the meantime, a veritable wave of patents in the use of artificial intelligence rolled towards German companies. Around 340,000 patent applications for artificial intelligence had been filed by 2016. According to a study entitled “Artificial Intelligence, Technology Trends 2019” by the World Intellectual Property Organization, IBM and Microsoft are leading the way.

Artificial intelligence (AI) comprises thinking and decision-making processes that are carried out by machines instead of humans or animals. For example, in the past technology could be used to monitor a process, but decisions about changing parameters were still made by humans, even if technology was used to implement those changes. With AI, humans disappear completely from the picture. With sophisticated sensor technologies that provide more information than a human brain can process, AI can receive and interpret huge amounts of data and react appropriately according to the algorithms and parameters set by the programmers.

AI enables the automated examination of clinical samples and is faster and more accurate than humans. The traffic volume can also be monitored by AI, whereby the traffic light switching can be adjusted accordingly – all without human intervention. AI is also used in machine learning, in which a computer constantly evaluates its own performance based on feedback and thus learns – a classic example here is machine translation.

In the meantime, entire systems including network functions can be integrated in one chip. Thanks to this technology, networks of physical objects could be developed (“Internet of Things”). Enabling technologies such as For example, the Internet of Things and AI have enabled the development of objects that function autonomously on the basis of networked data and that enrich the data from their environment by displaying data in the form of enriched or virtual reality.

In May 2018 the European Patent Office held its first conference on patenting artificial intelligence. The focus was on the challenges and opportunities of patenting artificial intelligence and the aim of raising awareness of the topic and encouraging an open exchange of views on AI. In a series of presentations and panel discussions, participants discussed various solutions on how the patent system can provide applicants with a solid framework for patenting AI inventions.

Next Post New research project at MIPLM: Agile IP-Design in the construction industry