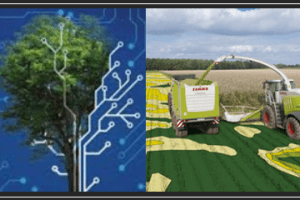 The trend towards digitalization is spreading at high speed and with enormous reach. There is currently no product to be identified that cannot be digitized accordingly. The EcoSystem Smart Farming is a typical example where the networking of agricultural machinery and external information sources and services has opened up new potentials for optimizing productivity in agriculture. A pioneer of this development is the agricultural machinery manufacturer Claas, who thanks to digital farming and precision farming also guarantees a minimal use of resources and at the same time maximum harvest yield as can be seen in the MIPLM case study.

The approach for Agriculture 4.0 is identical to that of Industry 4.0, in both cases it is about intelligently networking production processes and controlling them based on real company / customer / market interest. Agriculture 4.0 builds on the innovations and experiences of Industry 4.0 and develops them further, with the special requirements of the bioeconomic value chains. The value chains in agriculture are based on plants and animals that interact with each other and with the environment whose productivity is highly variable. Longer periods of time must be considered and included in the run-up to the actual product extraction.

The application of the digital concepts leads to the increase of either efficiency or effectiveness in the digital business models. Effectiveness is increased by the enabling of objects and humans in the market perspective and efficiency is increased by horizontal and vertical networking in the resource perspective. In Agriculture 4.0 examples for the enabling of objects can be autonomous driving, optimal route calculation and coordination between the harvester and the tractor on the field. Examples for the horizontal value-added networking are the determination, analysis and simulation of farm management data to improve the silo management, the time schedule of the harvesting and predicting the plant growth. An example for vertical networking is the optimization of the fertilization process through the simulation of the optimal tractor route and the optimal fertilizer amount and composition. Finally, examples for the enabling of humans are the assistance in choosing the optimal plant variety and seeding method, the fertilization amount and the optimal management for yield maximization.