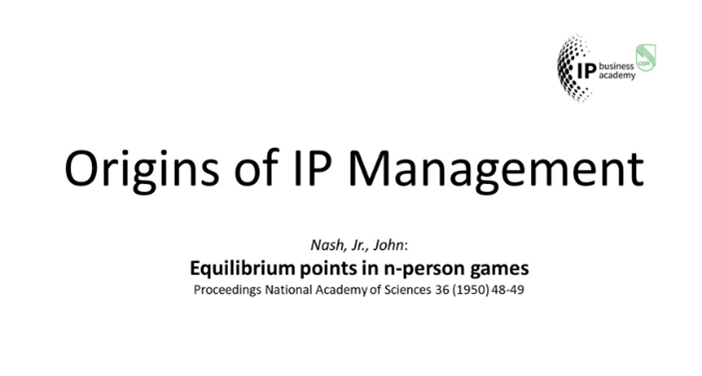 In this “Origins of IP Management” episode we want to discuss the Paper: John Nash, Equilibrium points in n-person games, Proceedings National Academy of Science 36 (1950) 48-49.

This paper is with less than two pages most likely the shortest scientific paper in economic science which had such a huge impact on many different aspects of IP management. It is one of the founding papers of the so-called game theory with applications in operations research, economics, finance, regulation, military, insurance, politics, conflict analysis, negotiations and decision making.

At IP Business Academy we use the concept in this publication in two of our Distance Learning courses in IP Management, in IP Valuation and in our Leadership course and in our second module of the Master Class in IP management: Master of Intellectual Property Law and Management – MIPLM.

Successful management is survival and survival is competition. Whenever two or more companies are faced with constraints, such as a fixed amount of resources, in a win/lose scenario, competition emerges. It’s in a market orientated framework inevitable. And from competition, in any of its many forms, stems strategy.

Game theory was given its first general mathematical formulation by John von Neuman and Oskar Morgenstern (1944). Game theory is a branch of applied math and used to create an optimum strategy in order to succeed in competitive situations of uncertainty and incomplete knowledge which are typical in today’s management of IP.

Generally, game theory investigates conflict situations, the interaction between the agents and their decisions. The subject of game theory are situations, where the result for a player does not only depend on his own decisions, but also on the behavior of the other players who are in the game.

The confrontation between the Soviet Union and the USA involved many leading game theorists from both sides of the Iron Curtain. The Cold War was a time of high uncertainty for the US, the Soviet Union, and the rest of the world. Both sides had little information about how the other was playing the “game of war” or how the other side would react to any given move. The concept of Mutually Assured Destruction is well known. This concept gave the United States the best insight into how the Soviet Union might react to an offensive or a show of aggression and vice versa. A great example of this is the Cuban Missile Crisis.

In today’s interconnected world, the business landscape is shaped by a variety of shifting forces. Whether it’s geopolitical issues like Brexit or technological advancements such as Artificial Intelligence. Our world is driven by – volatility, uncertainty, complexity and ambiguity (VUCA). This is challenging modern IP managers to come up with innovative solutions to new problems.

Things are changing more quickly and dramatically than ever before, which makes it harder to predict outcomes and make smart business decisions more difficult. Such uncharted territory can create discomfort for businesses. How can we plan for investment in IP and growth of the businesses if we don’t know where we’re headed?

In times of uncertainty, game theory should come to the forefront as a strategic tool, for it offers perspectives on how players might act under various circumstances, as well as other kinds of valuable information for making decisions.

Several factors in today’s economic environment should propel game theory to a prominent place in corporate and IP strategy. The global downturn and uncertain recovery, of course, have prompted radical shifts in demand, industrial capacity, and market prices. Some companies, emboldened by the crisis, have tried to redistribute market shares. They use new technologies and business models and even have novel corporate objectives, often with longer-term horizons for achieving success. Game theory helps to adapt IP strategy to these rapid changing environment and upcoming challenges.

Nash equilibrium is a concept within game theory where the optimal outcome of a game is, where there is no incentive to deviate from the initial strategy.

The prisoners’ dilemma is a common game theory example and one that adequately showcases the effect of the Nash equilibrium. The prisoner’s dilemma basically provides a framework for understanding how to strike a balance between cooperation and competition and is a useful tool for strategic decision-making.

John F. Nash, Jr., was an American mathematician who won the 1994 Nobel Prize in Economics, along with John Harsanyi and Reinhard Selten, for his development of the mathematical foundations of game theory.

The fundamental work of John Nash from 1950 helps to systematically analyze and develop IP strategies and making smart decisions in a VUCA world.

Next Post Technological Adoption & Innovation for SMEs: Towards a Smart IP Strategy