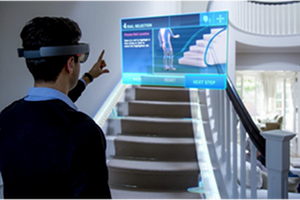 The HoloLens from Microsoft is an augmented reality or mixed reality device. Using multiple sensors, advanced optics, and holographic processing that melds seamlessly with its environment. These holograms can be used to display information, blend with the real world or even simulate a virtual world. This September Microsoft launched the HoloLens 2, which is even more immersive, what means that one feels completely involved in the environment: It’s magic! The tech giant introduced the next generation HoloLens as a practical device for companies to help their employees.

Augmented reality has become a tool for getting things done. HoloLens has retina-tracking capabilities, ARM processors and is connected with Azure artificial intelligence technology together with body and speech recognition. In this video the HoloLens 2 together with Azure AI demonstrate its power and possibilities of mixed reality in a business context. A photorealistic hologram of manager Julia White appears and delivers a part of the keynote in Japanese. A language that the real Julia White doesn’t speak. These advances in mixed reality and perception have been shaped by decades of research and business development at Microsoft: gesture recognition devices originally developed for the game console Xbox, investments in AI, lessons learned from the first generation of HoloLens applications and a long history of collaborating with customers and developing enterprise solutions.

One of these solutions is HoloLinc® from thyssenkrupp. With the HoloLens technology a digitalized sales process to improve efficiency and the customer experience was developed. Technology partner Zühlke implemented the project in record time. As a pioneer of digitalization, thyssenkrupp wanted to rapidly revamp its stair lift sales process. From the first on-site visit at home to the installation of a stairlift, it often takes over two months – at least in the past. With HoloLinc® thyssenkrupp simplified the process considerably. HoloLens technology not only helps the engineers, but above all the end customers, for they can see their proposed lift even before it is installed in the stairwell.

Most people want to live at home also in old age. Staying in their own homes makes a significant contribution to our quality of life, especially in the second part of life. In an increasingly aging society, however, the justified desire for self-determination and mobility is becoming a real challenge, particularly in front of one own home’s stairs.

HoloLinc shortens the delivery time to two weeks because the sales employee on-site can measure the entire stairwell with just one visit. In “HoloLinc”, “Holo” stands for the used data glasses called HoloLens. “Linc” describes their connection with the system’s intelligent planning software. Planning takes place in two steps: First, a thyssenkrupp sales representative precisely measures all the details of the customer’s staircase. In the second step, the collected data is transferred to Microsoft’s cloud platform Azure and can finally be visualized, either in the data glasses or on a tablet. This allows sales representatives to show the customer directly what the proposed lift will look like at home.

Because the technology used is easy to understand and intuitive, sales staff can record the necessary data quickly and routinely. Thanks to this direct representation via Augmented Reality, potential customers in many cases lose their initial “shyness” about installing a stairlift. Three years ago, thyssenkrupp engineers were already considering how this lengthy measuring and production process could be automated and accelerated. Together with Microsoft and Zühlke, they linked mixed-reality technology with a cloud-based configurator. The result is HoloLinc®. After the rollout in many European countries, thyssenkrupp’s engineers now have the digital equipment at hand to literally take the world of stairlifts to the next level.

But not only the technology and sales process are outstanding in this digitalization project, it’s also the joint and integrated IP strategy based on IP-Design for protecting the business case and the app. Thyssenkrupp IP team received 2019 the JUVE Awards trophy for German in-house IP team of the year for its remarkable IP management and IP-Design competency. Dr. Stephan Wolke is head of management board of the thyssenkrupp Intellectual Property GmbH and supports MIPLM education. This year he was industry supervisor of MIPLM oral final examinations. Here is an interview from summer 2019 with Dr. Stephan Wolke about IP-Design education at MIPLM. Microsoft is also supporting MIPLM and the graduate school on IP-Design.