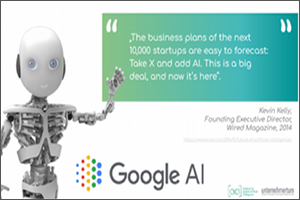 On October 22nd, industry representatives met at Google with the applied AI initiative to exchange experiences on the use of artificial intelligence in digital business models and to discuss the current status of the use of IP in AI-based technologies. Board members and top managers from Google, Schott, Airbus, WackerNeuson, Schattdecor, Römheld, Wittenstein, Giesecke & Devrient, SATA, ARRI and the Fraunhofer Society discussed their showcases and looked for success and failure factors for various applications and strategies.

The applied AI initiative was represented by Dr. Andreas Liebl, Managing Director applied AI Institute UnternehmerTUM Projekt GmbH. UnternehmerTUM is an initiative of the Technical University of Munich and Ms. Susanne Klatten, shareholder and chairwoman of the supervisory board of UnternehmerTUM for start-up funding and innovation consulting. The applied AI initiative has been active as a network since 2018 and is the largest of its kind. Applied AI helps to develop AI strategies and integrate them into specific business models, provides training in AI-based technologies and helps with the implementation of AI-based solutions.

How advanced AI is today can be shown in computer games, for example. When the AI ​​system AlphaGo from Google AI’s DeepMind won the board game Go against every grandmaster at terrifying speed, it was clear that an AI could teach itself this game. AlphaGo worked without expert knowledge, only with the rules of the game. But that was still a board game of limited complexity. The artificial intelligence AlphaStar, also from DeepMind, played better than 99.8 percent of all human gamers in the real-time strategy game StarCraft II in 2019. So far, AI systems have not been able to play such games on an equal footing against humans due to their high level of complexity and, like human players, had to play with a lot of incomplete information. In the meantime, AI-based systems can learn cooperative moves with other AI systems or people. AI systems can even prepare such moves. The following video shows such an example with a multi-agent hide-and-seek game based on OpenAI‘s AI. These game applications are used to study the learning behavior of AI and then to bring it into industrial application.

AI-based capabilities of machines are: vision, listening, voice recognition, robotics, prediction, discovery, planning, search, generation and design. For example, Google has managed to reduce the cost of cooling its data centers by 40% by using its own AI. For this purpose, the machine learning of the AI ​​took place over two years.

Another application of DeepMind is the optimization of wind farms. With the help of machine learning, the power output of a wind farm can be calculated 36 hours in advance. This means that the use of renewable energies in intelligent power grids (keyword: smart grid) can be optimized through a forward-looking combination of generation, storage and consumption. Power fluctuations due to renewable energies such as wind energy are a great challenge for coordination in the power grids. Thanks to the AI, load management can be achieved much more efficiently.

Another typical AI technology are generating adversarial networks: Generative Adversarial Networks (GAN), which belong to the group of algorithms of unsupervised learning; one also speaks of competitive neural networks. GANs were developed, among other things, for the creation of photo-realistic images, for example for image processing of astronomical images or for the creation of 3D models of objects from 2D images.

For example, realistic street scenes can be produced synthetically. As shown in the film, GANs can be used to create realistic human faces from other faces that cannot be distinguished from real people; But AI can also compose music, in the sense of generating it anew. And an AI can let people speak who are only given as an input to the AI ​​in a photo or image. This works even when there is only one picture, such as the most famous picture in the world, the Mona Lisa.

Very different technologies, logics and approaches are summarized under the concept of AI. Therefore, the term AI technology does not mean a specific approach, but rather the basic understanding of problem-solving behavior by an “intelligent” computer system. Basically, AI is already in almost every modern software today, even if this is not necessarily observable or noticeable for the user. Today, AI can also be found in kitchen machines such as the Thermomix. An AI works with its food recognition system, in order to release the heating area for high temperatures to roast meat, and this application is also patented.

In general, there are different approaches to patenting AI-based technologies and their application. In order to differentiate between these approaches, one has to understand how AI works in principle and where the difference to classic software technology lies. In both cases the software development starts with the problem analysis. After that, in traditional software development, a set of rules for solving the problem is developed and then implementation, i.e. programming and software implementation, takes place based on the established rules.

With AI-based software technology, the process is fundamentally different. After analyzing the problem, data must be sought and collected in order to train an AI system. This is an essential – possibly inventive – step. The question of how the corresponding data can be generated and processed, for example parameterized, must also be answered. The next step is the definition of the neural network architecture and the application of machine learning algorithms. It is important to find the right data and the right learning system to solve problems. This implementation is anything but trivial. The “finished” AI solution is therefore usually a highly specific and often by no means obvious technical solution to the original problem. Building such systems and selecting the right components is expert work and it is not certain whether a specific application can really be mastered with AI, which usually fails due to the unavailable training data.

According to a current study by WIPO, patent applications for AI-based technologies have experienced a real boom in recent years after decades of work on these concepts. The availability of machine-readable data, the dramatically increasing conectivity for the acquisition and evaluation of data and the rapidly increasing available computing power, especially in the cloud, are the main driving forces behind this patent development. The current results on the patenting of AI at the Graduate School of the Rudolf Diesel Medal were presented at the Graduate Colloquium at FESTO and published in the activity report.

AI technologies are already so powerful that social problems arise parallel to operational challenges. Suppose an AI can predict a machine failure with an 80 percent probability. Would that be enough for the customer to exchange the identified gears? Which factory manager wants to be held responsible if the machine control is taken over by an AI whose decisions cannot be traced? The final film shows how a speech by the former US president was falsified so well with AI that a person cannot tell the difference from the original.

The exchange of experience was a good opportunity to shed light on the complex interplay of AI technologies, digital business models and the IP protection of digital objects such as apps, business cases and positions in business ecosystems and to exchange ideas about specific industrial applications in the event of success or failure. Participants’ voices:

Translation: “We all know the important role AI will play in many different places in our companies in the coming years. Now it is important to transfer the first ideas and prototypes of AI-based solutions into concrete use cases with benefits and in the field. The workshop and the exchange provided valuable information and good approaches.”

Dr. Heinz Kaiser, Member of the Management Board, SCHOTT AG

Translation: “A very exciting lecture by Dr. Liebl on the topic of AI with a holistic overview of the current status, possible future scenarios, opportunities and challenges. I took away a lot of valuable suggestions and information for myself and our company.”