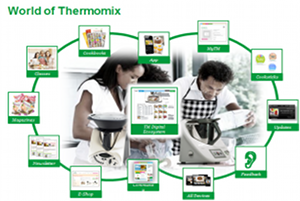 The 360° IP strategy for the Thermomix TM5 was consistently and systematically designed in such a way that it covers all key customer benefits in its proprietary IP portfolio. The TM5 is not just a market leader in terms of the physical device, but it is also a dominant design in terms of the entire ecosystem which surrounds it. This means that customer expectations are based on the features and the user experience of the TM5. The normal reaction of the competition in an attempt to increase its market share would be to align itself as closely as possible with the TM5 as regards the benefits expected by the customer, while at the same time offering a lower price.

All relevant product features from the customer’s perspective, i.e. those capabilities viewed by customers as “magic”, are protected by the IP portfolio. Ultimately, the IP protection of the Thermomix covers its look and feel. This means that the competition is excluded from using the central selling proposition of the TM5. The TM5 therefore effectively enjoys a high level of exclusivity in terms of those features which are relevant for purchase decisions or recommendations in the eyes of the customer. This verification of the effectiveness of the IP strategy for the TM5 has shown that the corresponding IP portfolio significantly contributes to the value created within Vorwerk’s business model for the Thermomix

The authors of this case study:

He started his career at Vorwerk in 1997 as an engineer in the R+D department, where he also held his first leadership positions before moving to LUX Asia Pacific as board member in 2005. When he came back to Engineering in September 2008 he took over the position as a board member for Purchasing, Logistics, IT and later for R+D and Quality Management. From January 2014 on he has taken over in addition the responsibility as Chief Executive Officer of the Division Engineering. From January 2017 on the position President and CEO of the Division Kobold at Vorwerk International Switzerland.

Sebastian Stephan, born in 1984, has a degree in Natural Sciences with a specialization in Applied Geophysics. In parallel to his doctoral studies, he attended a business school and completed an MBA program. His thesis covered the assessment of the IP strategy implementation at hand. Sebastian Stephan is now working as a Patent Consultant at OLBRICHT Patentanwälte in Frankfurt and is about to receive his license to work as a German and European Patent Attorney.

Dr. Wurzer is Adjunct Professor for IP Management at the Center for International Intellectual Property Studies (Centre d’Etudes Internationales de la Propriété Industrielle, CEIPI) at the University of Strasbourg, where he has been Director of Studies for the Master’s degree in Intellectual Property Law and Management (MIPLM) since 2007. Prof. Dr. Wurzer is Director of the Steinbeis Transfer Institute for Intellectual Property Management at Steinbeis University Berlin. He is Managing Partner at WURZER & KOLLEGEN GmbH, a consulting firm specializing in strategic IP management. Prof. Dr. Wurzer is Chairman of DIN committees DIN 77006 for quality in IP management and DIN 77100 for patent valuation. He is a member of the Board of Directors of “Deutsches Institut für Erfindungswesen e.V.” (DIE), Spokesman of the Board of Trustees awarding the Diesel Medal and Fellow at the Alta Scuola Politecnica at Milan/Turin Polytechnic. He is also a jury member for the 2018 German Innovation Award of the German Design Council and a member of the group of experts of the European Commission.

Proof of success: Empirical study of the 360° IP strategy for the Thermomix and its digital ecosystem Score: 0 / 5 (0votes)
Share on Facebook Pin on Pinterest Tweet on Twitter Share on Google Plus Send via WhatsApp Send via E-Mail
Eco SystemIP Strategy
Read more
Previous Post New research project at MIPLM: Standardization on Intellectual Property Rights Management in era of worldwide legislative harmonization and of disruptive technology innovation