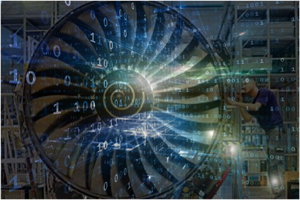 The fight for data sovereignty and thus industrial added value from data is getting tougher and what is happening in the civil aviation industry can become a blueprint for many other industries, according to the German Federal Government. For some time now, the aviation company Airbus has been transforming into a data group. The Skywise platform is currently being set up with the aim of playing a pioneering role in digitally based value creation for the entire aviation industry. Cost savings in maintenance, fuel savings, a reduction in operational disruptions and greater reliability, for example, are made possible by the available data.

Europe’s flagship project Airbus is undergoing a radical digital transformation right before everyone’s eyes. The main focus of Airbus’ business is still to assemble fuselage parts, wings, engines and electronics to make airplanes, helicopters and other aircraft. At the same time, however, the business is changing dramatically towards becoming the operator of a data platform and seller of apps. The Skywise data platform launched in the summer of 2017 and collected millions of data during the operation of the over 8000 aircraft that are already represented on the platform; also from the competition from Seattle. But the Airbus approach goes well beyond predictive maintenance and reducing downtime. Skywise is already a basis for developing, building and operating new aircraft, and maintenance companies, outfitters and suppliers are increasingly being integrated into the platform. Skywise has developed into the most important data hub for commercial aviation. According to board member Marc Fontaine, Airbus wants to “control the most important applications and the architecture of the platform”.

Airbus has the company Palantir on board as its partner for data analysis, which was also financed with money from the US secret service CIA. Palantir is still a service provider for various secret services today. Ultimately, it is the company’s special qualification to develop useful knowledge from very heterogeneous data, which makes it so desirable for a wide variety of applications. But Airbus itself is also expanding its competencies and has hired over 400 specialists for data analysis and processing. Airbus is also as professional as possible when it comes to IP compliance, IP management and know-how protection.

According to a current article from the Handelsblatt “Airbus annoys the industry with data fees”, the time has now come when Airbus would like to monetize its data capital and its investments directly. Maintenance specialist companies will in the future have to pay money for access to data from the data portal. From Airbus ‘point of view, it is clear that previous free services based on Airbus’ intellectual property must be economically rewarded in the future. As a consequence of this announcement, there is unrest and resentment in the maintenance industry, the so-called MRO specialist companies (Maintenance, Repair, Operations). However, there will be no way around this economic development of data-based value creation and thus a typical process emerges here, that the competitive and value creation relationships can be transformed by a data platform in an industry.

How dramatic these transformations can be for entire industries is shown by the recently completed report “A new competitive framework for the digital economy”, which was handed over to the government by the Expert Commission on Competition Law 4.0 in September. The commission has become very clear on this matter: “The digital economy is breaking up established value chains and leading to the restructuring of markets,” said the chairwoman of the BMWi’s expert commission, Prof. Dr. Heike Schweitzer.

Will Airbus become the Google of the aviation industry? The aviation eco-system as an example of the digital transformation Score: 0 / 5 (0votes)
Share on Facebook Pin on Pinterest Tweet on Twitter Share on Google Plus Send via WhatsApp Send via E-Mail
ComplianceData Analysis
Read more
Previous Post New research project at MIPLM: Business Alignment of IP for the Internet of Things in an early R&D phase