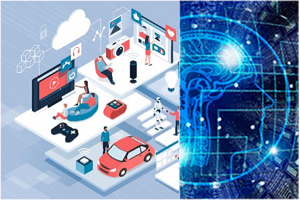 The development of streaming platforms was the big step to transform the business ecosystem of the media sector and media is also for other sectors a leading example how the digital transformation changes the business. To make this change of business models successful and sustainable companies have to define their patent strategies and build a strong and fitting patent portfolio. In the case of streaming services companies try for example to make use of the data of the buying behavior of the streamers to introduce targeted advertisement personalized for the individual streamers. An example for the optimal implementation of this type of new business model is the cooperation between the Chinese tech-company Tencent with the British AI and product placement experts of Mirriad, who have a very strong European patent portfolio to protect the new AI based business models.

A whole range of streaming platforms are currently fighting for the favor of consumers. In addition to the pioneers in the industry such as Netflix and Amazon Prime in the USA, there are also Disney+, HBO Max, AppleTV Plus and Peacock. In China Baidu’s streaming platform iQiyi is the fastest growing nationally and also known as the Neflix of China. Together with Alibaba and Tencent, collectively known as “BATs”, these three companies have the data about practically every Internet activity in China on their servers including streaming video files. The platform logic forces the players to quickly reach a size that is as dominant as possible – one can certainly speak of a “streaming war”. This is where the question of business models, financing and patent positions in this global race arises.

The ever-increasing production costs for the streaming content cannot be financed solely from subscription fees. Classic advertising is here out of the question because its absence is one of the basic promises of streaming services. This is how streaming platforms came up with the concept of AI-based digital product placement. Product placement is nothing new as an advertising concept. Audiences have already gotten used to the fact that James Bond drives an Aston Martin since “Dr. No” in 1962, his watch is an Omega and in “Skyfall” he drank Heineken. In 1985 you could watch Michael J. Fox aka Marty McFly in “Back to the Future” wear Nike sneakers from 2015 without shoelaces and be assured that there will still be Pepsi in the future. The sale of Ray Ban sunglasses has increased 40% in the seven months since the filming of the fighter pilot drama “Top Gun”.

But conventional product placement is very complex and requires extremely long lead times. It may take 15 to 18 months between shooting and broadcast, which is an unacceptably long time for some high-tech products such as cell phones. The product also has to be integrated at an early stage of production planning, so marketing budgets have to be set one and a half years in advance – hardly any branded company is willing to do so today. In addition, the advertiser for real product placement depends on the people on the set, the camera work, the mood of the director and the film editing – for marketing managers, an unacceptable loss of control.

This last point is of particular importance for the streaming providers. Since the actual data remains in their hands, the customer only sees the current data stream. This means that the digital product placement can not only be customized, but also adjusted at any time according to the desired relevance. Product generations could also be updated and new brand logos integrated. In addition, digital product placement can also cross the border of the screen. For example, the automaker Lancia has developed a technology that sends a sound that is inaudible to people whenever a digital product placement of their vehicles appears on the screen, as shown here in the image of the retrospectively integrated advertising board. With the help of the Lancia InteracTV app, which was developed by the Armando Testa agency in cooperation with Mirriad, fans of the brand can receive special promotional offers via their mobile phone whenever they see the placement in a TV show or in a film, in which the non-perceptible sound is sent and analyzed by the mobile phone.

AI technology is used in various places. It’s not just about optimizing the visual representation, since the integration of the advertising is not done manually, but automatically. It is also about the question of what is displayed at all. With machine learning, algorithms can continuously monitor changing data, recognize patterns and predict which products or services are likely to be most relevant to a consumer without knowing the real life of the people. It is also about how effective the respective product placement is in the context of the watched program. The decisive factor is the right emotional framework for the ideal, forward-looking product placement. From the point of view of the advertising industry, the aim is to make an individual, suitable offer at the highest personal level and not to finance widely dispersed, irrelevant and expensive mass advertising campaigns.

With the technology of Mirriad’s AI experts, such scenarios are possible and for the most part already real. Among other things, the technology company Tencent, one of the largest companies in the world, needs these opportunities to finance its own expansion of the streaming platform. Tencent is active in the development of digital hardware, search engines, video games and entertainment content. Tencent is not only behind the WeChat messenger service with more than a billion customers, but is also the world’s largest online game company. It is a kind of melting pot for technologies that develop from the (online) game world into classic formats such as film, series and show. Digital product placement is just one application variant of these AI-based concepts. Mirriad is the perfect partner for Tencent’s goals and fits into the European strategy of the giant who wants to concentrate more on the old continent. The trade conflict between Beijing and Washington is currently hampering expansion into the United States, where Europe is the natural next goal.

This cooperation is primarily about the very strategically structured patent portfolio of Mirriad. The British company has successfully established some of the most effective patent types in its business eco-system at the European Patent Office. The two European patents granted:

show how consistently and oriented towards future business models Mirriad thinks, when it comes to IP.

The fact that Netflix has now also looked for a provider of digital product placement and has found what it was looking for in Triplelift from the USA, as the Handelsblatt writes under the title “Personalisierte Schleichwerbung“, only shows how fundamental the considerations for this type of digital advertising in the logic of platforms have become.

Another example for the successful application of an IP strategy in the media ecosystem can be found in the MIPLM industry case study ARRI.

Next Post Digitization in the construction industry: Field report on IP design at Schöck